Modern man has become too materialistic and preoccupied in the pursuit of possession of material things. Possession of money has become the objective of every pursuit and the means do not matter. This excessive urge for materialistic gains has made him ignore the spiritual and moral aspect of his life. He considers them obsolete and unproductive. Today, man is motivated to do something only if he is assured of reasonable profit. He has neither the time nor the inclination to pause and ask himself as to where he is leading himself to. Such is the present social environment that even a child cannot remain unaffected by it. It is so easy to quieten a child with a promise of a gift and divert his mind from something parents have no patience to deal with.

Life has become mechanical. A child is constantly under parental and pear pressure to excel in his studies and move ahead of his fellow companions. The ultimate goal of every child is to imbibe an education which would fetch him a job with good remuneration and would be the source of envy for other. As a consequence from a very tender age, young minds become wrapped due to the obsessive preoccupation of the adults with financial security. It has been felt that basic physical means cannot be met without money, hence the need to prepare for a means of livelihood. But man is not merely a creature who will be content with getting food, shelter and clothing. He has a soul which also needs to be nurtured. It is, however, a pity that spiritual asset of the personality is totally ignored.

No wonder that the youth feels so restless, demoralized and disillusioned. The youth is in the Western country are turning towards the East for solace and spiritual comfort. They experience a sense of ennui and fell impatient with the preoccupation of their parents with work and money. It is largely due to disillusionment of such people that men like Rajneesha and Mahesh Yogi, who promised salvation and spiritual regeneration, had such a large following. But, escaping from the realities of life is not the solution.

In our country too, the youth have been influenced by the Western civilization and it has led to an erosion of moral spiritual values. They mechanically ape their western counterparts in their dress, liberal thinking, mannerism, interests and pursuits and look down upon their own rich cultural heritage.

Modern man has dug his own grave by rejecting the moral and spiritual values upheld in the religious scriptures of the world. The Bible, The Adi Granth, The Ramayana, The Bhagavt Gita, The Quran all contain words of wisdom which man has disdainfully rejected. Money has become God. It is to sound of money that man responds and not to the chiming of bells in the churches, temples, etc. which were once considered the abodes of God. 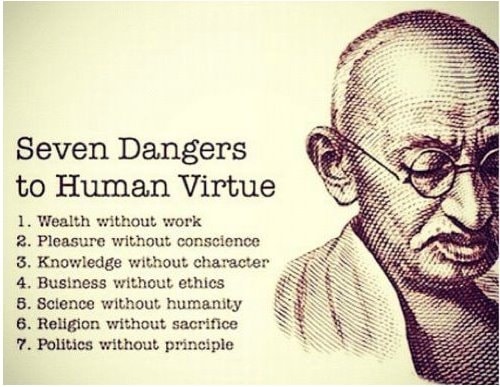 The content which is shared in this post is from my own writing blog: Naman's Board. All the images added have their respective credits.

No More Comments
Show More
More from this Storyista...

You may enjoy reading these…

I knew it was late! I searched under my pillow for my cell phone to check t...

Raj was waiting for Geeta at Marina Beach.He looked at his watch once again...

I woke up by the gong sound of my clock. I counted. It gonged for twelve ti...

She waited impatiently.A thin woman – thin to the point of being gaunt. A...

The Wound Is Still Not Healed

After a hard day’s toil, I would have left my office at the closing time ...

Rahim signaled Amar from across the room. He yawned in gesture and expresse...

Passion of the Mouse

Mom was my first and only Love Guru. She often used to coach me what women ...